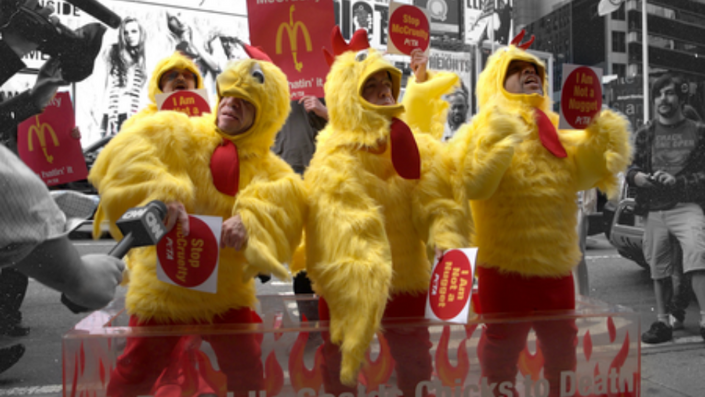 on a Shoestring Budget

This course is only available to Digital Campaigning Certificate Program participants at this time.

Photo Credit: A troupe of little people in chicken suits flocked to McDonald's in Times Square brandishing signs declaring, "I Am Not a Nugget!" The diminutive dancers from Centerfold Strips—which bills itself as the number one source for midget and dwarf strippers—made their entrance in a pink stretch Mini Cooper and pounded the pavement in a choreographed musical protest against McDonald's outdated and unkind slaughter practices.
Chickens who are raised for McNuggets are killed using an old-fashioned method that causes millions of birds to have their wings broken and many to be scalded to death in defeathering tanks. Often the chickens are still conscious when they are sent, upside down, to the knife. A less cruel slaughter method—and one that is already used by McDonald's European suppliers—is available, but the company refuses to require its U.S. suppliers to upgrade to it.
"We hope our little protest calls attention to the big cruelty that McDonald's inflicts on chickens every day," -- PETA Senior Vice President Dan Mathews, who was on the scene.

(Photographer and author of the description above: David Shankbone, 2010)

This course is closed for enrollment.