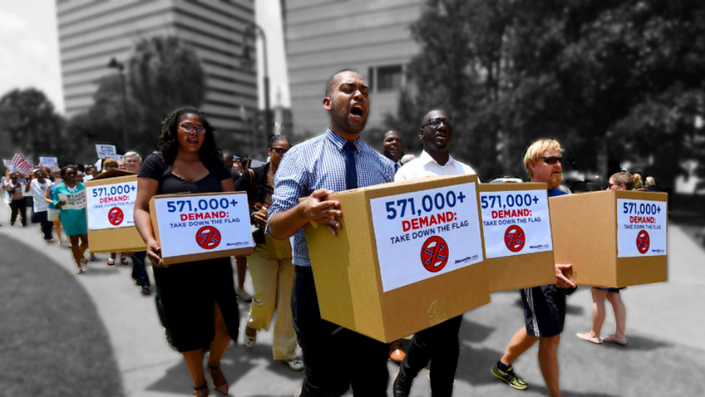 Petitions aren’t usually effective if we deliver them and then wait for a response. So how can we use them most powerfully?

In this course you will learn about:

Photo Credit: From MoveOn blog: On Wednesday June 19, 2015, nine Black South Carolinians were gunned down after welcoming a man into their Bible study. Their deaths were a direct result of hatred and racism. The next day, as South Carolina—and the nation—mourned their deaths, a symbol of hatred and racism against Blacks still flew in front of the South Carolina statehouse. This didn’t sit well with MoveOn member Karen Hunter, and so she decided to do something about it. The next day, she began a petition that would become the second-fastest-growing in MoveOn.org history. In total, more than 500,000 Americans signed Karen’s petition demanding that South Carolina #TakeDownTheFlag.

Karen and dozens of South Carolina MoveOn members delivered the petition to Governor Nikki Haley. The next day the Confederate flag was ordered to be removed from in front of the statehouse!

To be sure, this is the result of decades of work by thousands of Americans and many groups, including especially the NAACP.